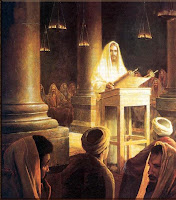 Have you ever wondered about what Jesus was like as a child, as a teenager, or as a young man, growing up in Nazareth? As the promised “Prince of Peace,” how did he act, what was there about him as a twenty-something that was different?

We will never know because the Bible is silent on this subject and there is no sense speculating, although I sometimes do. We know so little about his upbringing, his family, his training or his work, but there is a good chance he worked either as a carpenter or stone mason like his father Joseph.
We know his mother Mary outlived him, but we don’t know when his father died or what happened to any brothers or sisters, except his brother James. We do know he was raised in the Galilee region, an area where conservative Jews chose to live after leaving their exile residence in Babylon.
Luke 4 tells us the story of Jesus’ “coming out party” and it is a remarkable story. After learning very little about his early life, Luke tell us that Jesus, as a thirty-year-old, was asked by the leaders of the Nazareth synagogue to read from the prophetic scrolls, which was a standard part of Sabbath worship.
By the way, this episode is the oldest known account of a synagogue worship service and most scholars think that it is unlikely that there were designated readings during the synagogue service, so either Jesus or the synagogue leader may have chosen the reading from Isaiah.
We don’t know how much Jesus read from Isaiah that morning, but Luke tells us that Jesus focused on some key passages and used these passages to describe his ministry. Luke records this part of Jesus’ reading that morning:
“The Spirit of the Lord is on me,
because he has anointed me to preach good news to the poor.
He has sent me to proclaim freedom for the prisoners
and recovery of sight for the blind,
to release the oppressed,
to proclaim the year of the Lord’s favor.”
(Luke 4:18-19)
The passage from Isaiah that Jesus read described the coming of the promised Messiah, the “Prince of Peace,” and Jesus amazed everyone that morning by identifying himself as the one Isaiah was talking about. It was a bold declaration, a manifesto, a statement of purpose, and it clearly linked Jesus to hundreds of years of Old Testament prophecy. It was a re-statement of the “peace pictures’ of the prophets who promised that the Messiah would bring good health, ample food, freedom from oppression, and security. It was the beginning of the fulfillment of the promise of peace, of Shalom in all its many facets, both spiritual and physical.
This was Jesus’ “mission statement” and he intended it to be a summary of what his ministry on earth would be. Three principal themes were emphasized: he intended to preach the good news of God’s offer of salvation, to exercise social justice for those who were suffering, and to show compassion for those who were treated as “outsiders.”
This bold declaration by Jesus almost cost him his life. What a beginning to his public service! In fact, his public service lasted only three years and he was executed as a common criminal, despite never committing a single crime or illegal act. Like many peacemakers in history, he died because of opposition from evil people, yet he showed us how to live a life of purpose, a life of significance, despite how others around him chose to live.
Jesus’ instruction to us is to make the choice to live like him, as a peacemaker – one who proclaims the “good news,” works for social justice, and is compassionate toward those who are marginalized in our society. What a challenge!
So What?

If you are interested in learning more about this episode in Scripture, I would encourage you to read chapter three (“Mutiny on the Sabbath”) in Doug Greenwold’s book, Encounters with Jesus. Information on this book is available at http://Preserving BibleTimes.org.