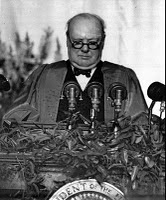 David McCullough is one of my favorite historians and I think I have read most of his books, especially his biographies of American Presidents.  I hesitated when his biography of Harry S. Truman was published because of its length (992 pages), but once I began reading it I was captivated by its drama.  Because my own doctoral dissertation dealt with World War II history and the beginnings of the Cold War, I was especially interested in this period of history and in particular the emerging confrontation between the Soviet Union and the United States following the defeat of Nazi Germany.  The other insight that occurred to me as I read Truman was the incredible challenges facing American presidents.  The complexities of the issues that face a President every day make my job as a university president seem easy by comparison.
U.S. Ambivalence Toward Stalinist Russia
When Harry S. Truman became President on April 12, 1945, following the death of Franklin D. Roosevelt caused by a cerebral hemorrhage, he shared the same ambivalence toward Joseph Stalin as his predecessor.  Presidential advisors gave him conflicting advice, some arguing for him to take a hard stance against Stalin and his aggressive actions in Eastern Europe, while others encouraged him to be patient and understanding in light of the pain the Russians had endured from Hitler’s army.
Winston Churchill had no doubts about Stalin’s intentions to build a Soviet empire in Eastern Europe, as his Red Army chased retreating German soldiers back toward Berlin.  On May 6, 1945, even before the German surrender, Churchill sent a top-secret telegram to Truman urging him to instruct his military commanders not to retreat from their present positions in Germany and not to pull back to the occupational line earlier agreed with the Russians.  Six days later, Churchill sent a second telegram in an even more urgent tone in which he wrote “an iron curtain is drawn down upon their [Soviet] front” and “we do not know what is going on behind [it].”  This is the first time this expression was used by Churchill.
Despite this advice, Truman ordered American troops to retreat to the occupational lines agreed to earlier with the Russians and made his position clear that he was going to seek accommodation with the Russians in Eastern Europe because the United States still had a war going on in the Pacific against Imperial Japan.  Presidential advisors on both sides of this issue competed for the President’s ear and both sides were frustrated because Truman seemed to agree with whoever talked with him last.  In fact, McCullough notes, Truman was not sure how to respond to the Soviets.  On the one hand, he wanted to work constructively with them as allies following Hitler’s defeat, but he also did not want to be accused of “appeasement” by giving in to Russian demands.  In McCullough’s judgment, Truman “had no clear policy or long-range objectives . . . .at bottom he had no intention of being either belligerent or weak.”
Churchill’s “Iron Curtain Speech”
Nothing highlighted Truman’s ambivalence about relations with the Soviets more than the events surrounding Churchill’s speech in Fulton, Missouri, in early March 1946.  When the president of Westminster College in Fulton, Missouri, suggested that Winston Churchill be invited to his small Presbyterian college to give a speech, Truman thought the idea was good one and he invited Churchill to come to “this wonderful school in my home state . . . . I’ll introduce you.”
Churchill accepted the invitation and also made it clear that he was going to make a major foreign speech.  In the days leading up to the speech, Churchill shared the text of his speech with Truman’s key advisors who briefed the President on its contents.  As they traveled cross-country in Roosevelt’s armored railroad car, the Ferdinand Magellan, Truman was in high spirits.  He was bringing the most famous speaker in the world to a college in his home state that no one had ever heard of.  He also enjoyed the poker game that they played until 2:30 a.m.
The next morning, Churchill made some final changes in his text and shared them with President Truman, who said this speech would “do nothing but good.”  Then, on a sunny day with temperatures in the high sixties, Churchill delivered his speech that included the famous line: “From Stettin in the Baltic to Trieste in the Adriatic, an iron curtain has descended across the Continent.”  He argued that western democracies, especially England and the United States, needed to prevent the “indefinite expansion of [Soviet] power and doctrine.”  From the expression on Truman’s face and his repeated applause, it was obvious he approved of the speech, as did the audience.
But the immediate reaction across the United States was strongly hostile to Churchill’s argument.  Editorials, for example in The Wall Street Journal, accused Churchill of poisoning relations between the United States and Russia.  The journalist, Walter Lipmann, called the speech an “almost catastrophic blunder.”  Truman was stunned by the criticism and, when he returned to Washington, he quickly backed off from any responsibility for the speech, telling reporters he never knew what Churchill was going to say.  When asked for his comments on the speech by reporters, Truman lamely pleaded “no comment.”  To placate Stalin, who described the speech as a “call to war,” Truman invited him to come to America and speak at the University of Missouri.
As McCullough notes, “it was a bad time for Truman.”  He seemed bewildered and equivocating, incapable of establishing a clear policy toward the Soviet Union.  It was only in the months that followed that Truman realized that there was no appeasing the Soviet dictator.  Historians will argue for years about when the Cold War began, but for Truman the pressures of the presidency and the ambiguities of the post-war world lead him to mislead Americans about a speech by America’s truest ally, Winston Churchill, a speech he approved of in advance, but later disowned.
– Originally released in July 2010