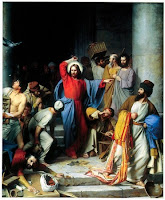 How does anger, even righteous anger, fit in the job description of a peacemaker? Can peacemakers express anger without contradicting their role as reconcilers? Jesus gave us the opportunity to work through this tough question by his own example.

Matthew, Mark and Luke all record the story of Jesus ordering the money changers and merchants to leave the Temple grounds sometime during the week following his triumphal entry into Jerusalem and before his arrest. The Apostle John documents a similar event, but his description places the event earlier. It therefore seems likely that Jesus cleansed the temple twice during his three-year ministry.
In both cases, Jesus drove out the money changers and merchants and turned over their tables. In John’s account, he notes that Jesus made a whip out of cords that he used to drive the animals from the temple area.
Jesus’ righteous anger over how the merchants had turned the “house of prayer,” “my Father’s house,” into a “den of robbers” resulted in these acts of cleansing. Mark and Luke both point out that, although the cleansing of the temple angered Jewish religious leaders, the people were “amazed” at his teaching. It is important to note that Jesus used force in clearing the temple, but there is no record of him striking anyone or using violence to punish the merchants or money changers.
This dramatic confrontation gives us insights into the way in which justice and holiness are linked. Just as God in the Old Testament uses force as an instrument of his judgment against idolatrous and unjust nations, so Jesus uses force to condemn the abuse of the temple. The Prince of Peace was not passive in the face of wrong. Biblical peace is never a camouflage for injustice. Evil requires a response and Jesus’ cleansing action is instructional for us.
Confronting evil is never an easy task, especially when we are often out-numbered. But evil and violence destroy lives and wreak havoc on God’s creation. Peacemakers must be committed to working for justice, not ignoring it, and sometimes this requires direct action, identifying the injustice – naming it and calling into account those who are responsible. That’s what Jesus did!
So What?