Skip to content
June 4, 2012 Susan Rhea
As I look back over my life, there are a small number of key mentors who helped to shape me – mentors who were models that I wanted to emulate because I saw that their lives were lived in obedience to Jesus’ teachings. They were examples to me of what it meant to live a life as a peacemaker, a follower of Jesus who brought healing and reconciliation to our hurting world. I saw their lives and decided I wanted to follow their example. Dr. John R. Dellenback was one of these people. 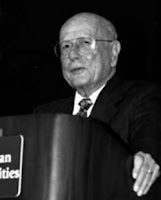 I first met John Dellenback when I began the American Studies Program (ASP) on Capitol Hill in the fall of 1976, a work-study program sponsored by the Christian College Consortium and Coalition (CCC/C). I had heard his name through friends in the National Prayer Breakfast and was excited to meet him. John had been elected to the Oregon State Legislature in 1960 and then to the U. S. House of Representatives in 1966, where he served until 1974. Following his defeat in the election of 1974, a defeat largely attributed to the anti-Republican backlash in the wake of the Watergate scandal, he was appointed Director of the Peace Corps by President Gerald Ford and served in this capacity from 1975 to 1977.

I have clear memories of bringing our ASP students to his office right across the street from the White House and talking with him about his leadership of that agency and how, as a Christian, he understood his role as a public servant. He was always so gracious to our students and such a great example of a man who was serving God with distinction in high public office.

Although I admired him as a Congressional leader and Peace Corps Director, when I learned he had been chosen to serve as the next president of the Christian College Consortium and Coalition in 1977, I remember thinking this was a mistake. What did he know about Christian colleges and universities? He had never attended one, and now he was going to become my boss. Was I ever wrong!

Dr. Dellenback served as President of the CCC for eleven years (1977-1988) and I had the privilege of working closely with him for all that time. Dr. Karen Longman and I were his vice presidents and the three of us formed a bond that profoundly shaped my life. He became a mentor and, by his example, I learned so much about biblical leadership by his words and deeds.

Lessons Learned As I look back on my eleven years of working with John Dellenback, the following lessons stand out:

John was soft-spoken and warm, a model of generosity, with a great sense of humor. He loved and respected people and treated everyone with dignity. John was a gift of God to me and a model of a life of a shalom-maker.

* If you are interested in learning more about this remarkable Christian leader, see the video entitled “Oregon Legends: The John Dellenback Story,” a 28-minute video available at www.soptv.org/oregon-legends-john-dellenback-story/. The focus of this video is on John’s leadership in Oregon and later in Washington, D.C., but also follows him on his trips to developing countries as Peace Corps Director and Chairman of the Board of World Vision. He had a heart for the world and especially for the poor in developing countries and America’s urban centers. John died in 2002 and his memorial service will be an event I will never forget.