Skip to content
September 4, 2012 Susan Rhea
Have you ever wondered why God sent his son into the world when he did? The Apostle Paul wrote, “When the time had fully come, God sent his son” (Galatians 4:4, NIV) – other translations say, “In the fullness of time.” Why does the Old Testament end and then we find a 400-year gap before the birth of Jesus? I studied this question and gained some fascinating insights about the context of Jesus’ life. 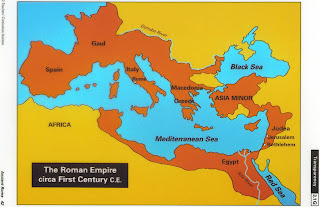 It’s an election year here in the States, so let’s start with politics. The Mediterranean region was dominated by a single political power, the Roman Empire, and that Roman rule meant peace and stability in the region. A commercial system had been created by the Romans that expedited freedom of travel and the shipment of goods. While the political system was Roman, the dominant cultural influence was Greek and the language of the empire was Greek, because the Romans took over the empire created by Alexander the Great and the powerful influence of Greek culture was absorbed by the new rulers.

The Romans were prodigious road builders and they spent 500 years completing a road system that reached every corner of their empire. It is estimated that Roman roads covered a distance equal to ten times the circumference of the earth at the equator! This road system had 50,000 miles of first class highways (15-20 feet wide) and 200,000 miles of secondary roads (5-6 feet wide). I have been amazed to see sections of Roman roads still in reasonable condition in Europe and in Israel.

Actually the significance of the timing of Jesus’ birth has more to do with what happened after his death and resurrection than during his life. For his disciples, it would not have been possible to share the “good news” if this region was full of conflict and warring states and if travel was inhibited by poor roads. It would not have been possible if the region had been broken up into different tribal areas with languages unknown to others. Palestine in Jesus’ time was an area about 50 miles wide and 150 miles long, roughly equivalent in size to the state of Connecticut. As far as we know from Scripture, Jesus never traveled outside this area and avoided many of the major cities built in this region that Romans used as military and political bases.

While Jesus lived and traveled in only a small, outlying part of the Roman empire, he certainly could not escape the Roman authorities and their claim that there is “no god, but Caesar.” In fact, the Romans ultimately executed him.

Why did God decide to send his son into the world at this time and in this place? Why decide to have his son born to a poor Jewish girl in an obscure, insignificant town far from the capital of the Roman Empire? Why did God choose the Jews as his people and not the Romans? We will explore these questions in the posts that follow. Stay connected.